Warmed by the Gulf Stream, Bermuda enjoys a sub-tropical climate that doesn’t see extremes of either hot or cold, meaning you will never experience severe cold, snow or scorching heat waves in Bermuda.

The current weather conditions in Bermuda, as well as a four-day forecast, are shown below
–


The location could not be found.

Bermuda doesn’t have a “rainy season” as such, but does experience rainfall sporadically year round, with an average of 4 -5 inches per month.

Rather than an all day drizzle, most rainfall on the island occurs in showers, so the chances of your entire day being ruined by rain are minimal, while your chances of being caught in a shower are higher!

The Atlantic hurricane season is officially from 1 June to 30 November, and although they are rare, Bermuda can be affected by hurricanes sometimes.

The last time Bermuda sustained serious damage from a hurricane was when Hurricane Fabian struck the island in 2003, however since that time Bermuda has had several smaller hurricanes arrives on our shores.

All properties on the island are built to withstand hurricanes, and the Bermuda Hotel Association has a “Hurricane Guarantee” in place to assist you on the off chance your visit is affected by a hurricane.

Temperatures in Bermuda can reach around 85°F [29°C] during the hottest months, while the coolest months see lows of around 60°F [15.5°C]. The Bermuda Weather Service’s average monthly temperatures using data spanning a 50 year period [1949-1999] is below. 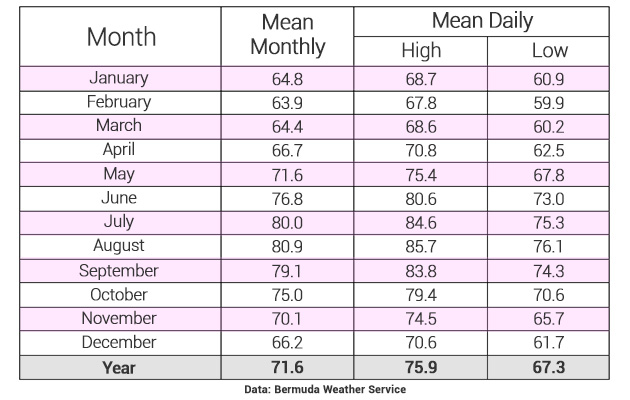 Most entities in Bermuda have air-conditioning, whether it be our hotels, shops or buses, so during the summer months you can ‘cool down’ in most indoor locations.

If you are planning on renting a scooter, you may wish to bring a coat, as riding a scooter can get quite chilly at night, especially during the winter months.