The visit, which was made possible through the invitation of the Bishop of Hamilton Bermuda, saw Premier Dunkley bring greetings on behalf of the people of Bermuda, along with the plaque, which came courtesy of Westgate Correctional Facility inmate Dwayne ‎Signor. 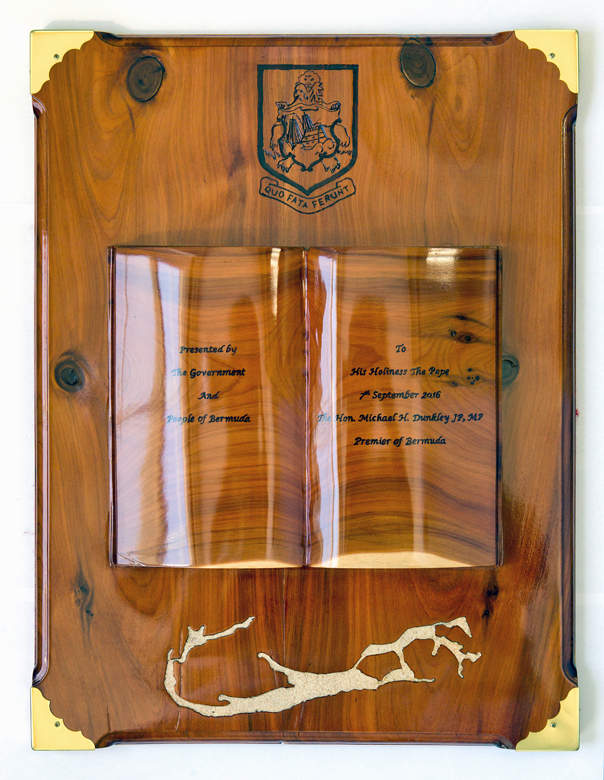 In September of last year, Pope Francis had his first encounter with Bermuda, offering his blessings to the island and its inhabitants from above via a message sent to Bermuda Air Traffic Control.

On the afternoon of Saturday, September 19, 2015, flight crew members en route to Cuba from Italy contacted the Bermuda Air Traffic Control Tower, allowing the Pope to send his message as he asked God to grant “well-being and peace” to those below.

The full radio transcript of the Pope’s message to Bermuda reads, “I send cordial greetings [to] your Excellency and your fellow citizens.

“As I fly over your country [Bermuda] on my way to Cuba for a pastoral visit; evoking these blessings upon you all. I ask Almighty God to grant to the nation; well-being and peace. From a peaceful Pope.”

The Bermuda Air Traffic Controller on duty at the time thanked the Pope on behalf of Bermuda and wished him God’s blessings on his flight, to which the Pope responded, “thank you.”

Bermuda’s only visit from a sitting Pope occured in 1968, when nearly 10 percent of the island’s population descended on the airport in order to welcome Pope Paul VI when he made a brief stopover here.

Between four and five thousand locals jammed the airport to greet the former Italian cardinal, who reigned as Pope of the Roman Catholic Church from June, 21 1963 until his death on August 6, 1978.

In his welcoming speech at the time, Bermuda Governor Lord Martonmere said, “There are days in the life of every country when history is made — this is such a day. People of many faiths have come here tonight to pay tribute to a Pope who is not only a great religious leader but also a great apostle of world peace and human understanding.”

Pope Paul said, “We are well pleased that our return journey from the Eucharistic Congress at Bogotá permits Us to visit, though it be for a few brief moments only, these islands so justly famed for their beauty, and so find ourself among you and greet you all.

“May God bless all of you who have come to meet Us. May He bless your homes and all whom you hold dear. And before We leave these islands of the Atlantic, so distant on the map, yet so close to our heart, we lovingly impart our special blessing to you and to your spiritual and temporal leaders, praying that God may abundantly bestow on Bermuda the blessings of true peace and prosperity.”