After a serious fall in April, Arlene Simmons’ life began to change drastically.

As an Executive Assistant at a busy reinsurance firm, Ms Simmons counted herself pretty active before the accident. However after breaking her foot and damaging the left side of her body, she struggled to even get dressed in the morning.

“The fall happened during the Shelter in Place period, so I couldn’t get to the physical therapist to manage the pain until June. Once I finally got to my physio, I went in to his office one day in tears and said:‘I can’t do this anymore’. The pain was just too intense.”

Ms Simmons recalled that her back, knee, ankle and shoulder were all hurting. 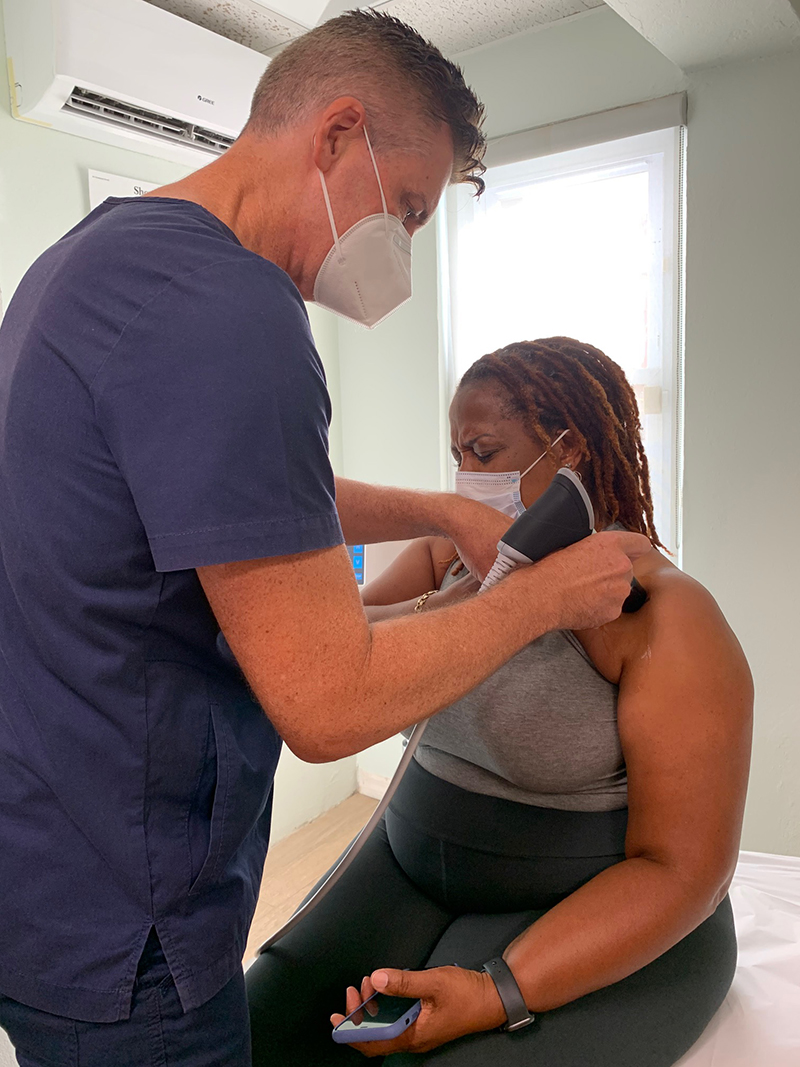 Eventually, she was referred to Dr Jeff MacLeod, a GP at Northshore Medical and Aesthetics Center who specialises in sports medicine.

“My physio just recommended me to Dr MacLeod one time. He took care of my back because I had so much pain running down my leg. Then he said: ‘I’m going to tackle your shoulder’. That’s when he introduced me to the shockwave treatment.”

Dr MacLeod said: “Shockwave therapy delivers kinetic energy through a gel medium to break down scar tissue, reduce pain and restore normal function. By causing targeted micro-trauma, it stimulates the immune system to generate new blood vessels and heal areas which did not recover properly the first time around. 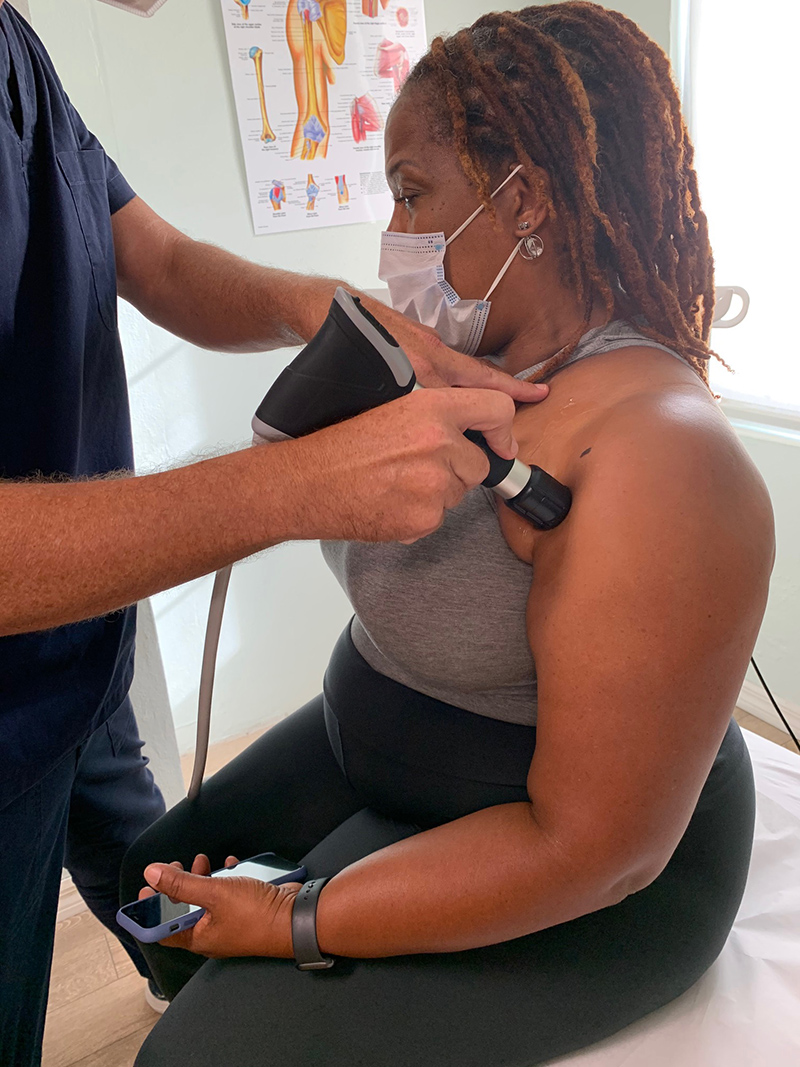 “While mainly used to treat tendons, ligaments and connective tissue, the full scope of its application is still being realised as new trials are continually being undertaken, treating conditions from erectile dysfunction to trigger fingers,” the physician said.

Ms Simmons is just one of the local residents singing the praises of this new therapy.

“The results speak for themselves,” Ms Simmons said. “Before, I couldn’t reach high to grab things or get my shirt on without literally screaming because the pain was so intense. But I realised while driving in for my third treatment that I could use my left arm again, which was something I couldn’t do for months. This therapy has made so much difference in my everyday living.”

Local athlete Keishen Bean is another example. He said his pain “is now at zero” since undergoing the shockwave therapy, in combination with Platelet Rich Plasma [PRP] injections to his knee. 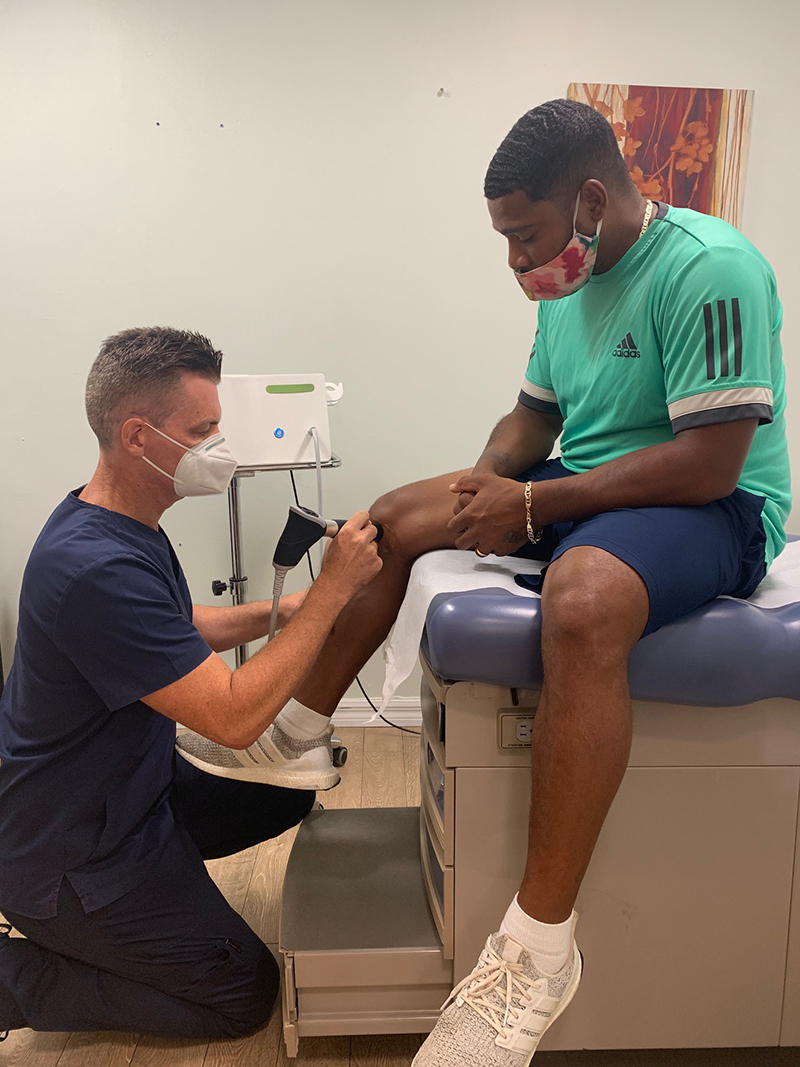 The former Bermuda National Team football captain had reconstructive surgery at age 18 on his ACL [anterior cruciate ligament], which is one of the key ligaments that help stabilise your knee joint. Now in his 30s, Mr Bean said his sporting injuries have been “really catching up with him”.

“I came to see Dr MacLeod about eight months ago, as I was having some inflammation and pain around the knee joint,” Mr Bean said. “We spoke about a couple different treatment options and I decided to go with the PRP injections and shockwave therapy. For me the results have been phenomenal.

“I’ve been putting added stress on the injury by running, swimming and playing football, but it feels much better than what it did. I used to have a lot of inflammation and pain and now the pain is almost non-existent.”

Dr MacLeod, who studied Sports and Exercise Medicine at the University of Bath, UK’s premier Sports Science facility, worked for nearly 12 years as a Sports Medicine doctor for the British Defence Medical Services, eight of which were within state-of-the-art Regional Rehabilitation Units. He has extensive experience in diagnosing and treating sports and training injuries and is the latest physician to join the team at NMAC.

To learn more about shockwave therapy, visit www.nmac.bm or www.shockwavetherapy.eu.