Figuratively speaking you can think of the pawpaw as the Smith family tree.

Bermuda College senior lecturer Dr. Edwin M.E. Smith, his wife and two sons all contributed to Pawpaw Bermuda, a richly illustrated and elegantly designed new book on one of the island’s favourite fruits.

The event was a combination book launch and art show, highlighting some of the work featured in Pawpaw Bermuda.

“The production of this book, and the accompanying art exhibition, is a family effort,” Dr. Smith said.

“Our family enjoys eating pawpaws and recognise it as an important part of Bermuda’s culture.”

While Dr. Smith researched the roles played by the tree and fruit in everything from cooking to folk cures to Bermuda art, his wife, Shirley Ann, was “the specialist in the kitchen” when it came to putting the recipes he uncovered to the test.

Their sons, Stefan and Micrae, provided photographs and graphic design expertise respectively [for the last decade Micrae Smith has incorporated fiber from the trees into the pulpy base of homemade paper he uses for art pieces, yet another purpose for the highly versatile pawpaw].

The pawpaw tree is deeply rooted in Bermuda’s soil and history, having been introduced to the island from North America in 1616 at the same time as figs, plantains and pineapples.

Dr. Smith was inspired to explore the history of the tree and its mango-shaped fruit because “we had bumper crops of pawpaws over the last two years from our few trees. I decided to do something creative with them.”

He continued: “Of interest to me personally is the fact that pawpaws have helped to ensure island survival, not only as a source of nourishment and healing, but also as a contributor to the island aesthetic as an inviting paradise. Specimens appear in much of the fine art of Bermuda.

“The tree and its fruit are important and deserving of iconic status.” 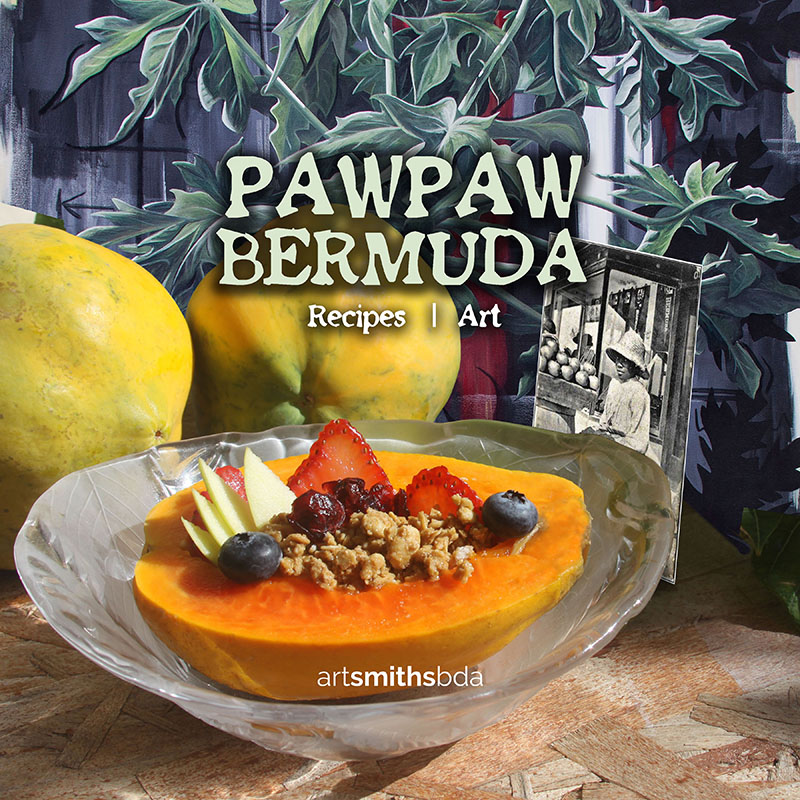 In her foreword to the book, Bermuda Folk Remedies author Dr Kuni Frith outlines the medicinal uses locals have found for the fruit over the last four centuries.

“In Bermudian folk medicine the green skin of the pawpaw was made into a poultice to heal boils, leg ulcers and wounds,: she says. “The green fruit was boiled and eaten and and the liquid was consumed to reduce high blood pressure and to reduce inflammation …

High in anti-oxidants and with properties which, among other things, aid digestion, reduce cholesterol levels and boost energy, Ms Frith points out the pawpaw has been a staple in folk remedies both here and elsewhere almost from the moment the first person plucked the first fruit from a tree.

She goes on to say that from a culinary perspective the fruit not only turns up in the signature Bermudian casserole dish Pawpaw Montespan but in stews, soups, vegetable dishes. chutneys, fruit salads and preserves.

Dr. Smith acknowledges the pawpaw’s almost ubiquitous role in Bermuda cuisine in the book by including traditional and modern local recipes which run the gamut from breakfast dishes to entrées to desserts, breads and even smoothies.

And in an extensive gallery section, he demonstrates how the pawpaw has become a kind of visual shorthand for the Bermudian lifestyle in both fine and popular art.

Dr. Smith uses postcards, photographs and paintings dating from the 19th century to the modern day to illustrate his argument that a tree introduced to bolster local food resources also ended up reinforcing the outsiders’-eye-view of Bermuda as “a desirable tropical paradise”.

The inclusion of pawpaws in Bermuda-related artwork, as was also the case with palm and banana trees, came to suggest a touch of the exotic to overseas’ viewers.

However, he also points out that to Bermudian artists and art connoisseurs pawpaw imagery “is seen from a different perspective altogether” — as a symbol of former experiences and long-standing local traditions.

“This book is a compilation of information that merges traditional and new ways of enjoying pawpaws,” says Dr. Smith. “It is also a collection of [images which appealed to] visitors and residents who enjoyed pawpaws for their graphic appeal.

“The combination provides a unique insight into Bermuda’s past and present, [a reminder] that a closer look at individual components of any culture reveals historical activity and origins of its values.”

Dr. Smith thanked the Department of Community & Cultural Affairs for its support of the Pawpaw Bermuda project.