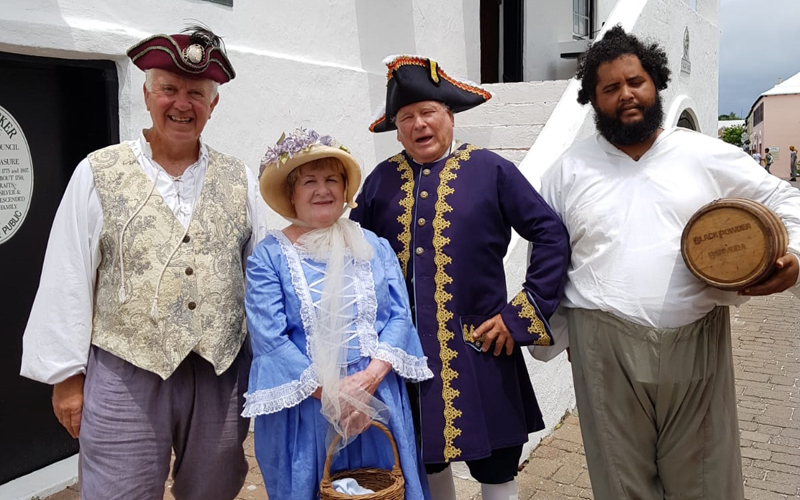 Visitors to St George’s can meet characters from Bermuda’s 1775 Gunpowder Plot over the next few weeks as the old town celebrates their role in Bermuda’s fascinating historical heritage.

“Today marks the actual anniversary of the Gunpowder Plot, which tested Bermudian loyalty to the Crown and underscored islanders’ close family and commercial ties with America,” the BTA said.

“It also highlighted Bermudians’ support of George Washington’s Continental Army during the 13 colonies’ Revolutionary War against Britain. On the night of August 14, several dozen men broke into an unguarded ammunition magazine above Tobacco Bay, stealing more than 100 casks of gunpowder for delivery to American ships waiting offshore. The stolen powder made it safely to Washington’s troops, convincing the Continental Congress to lift its crippling wartime embargo on food and supplies to the island as a British colony.

“Now, details and personalities involved in the exciting episode have come alive in modern-day St George’s. Local actors, dressed in period costume, are providing a living-history experience by regaling town visitors with entertaining facts and anecdotes about the event that exploded tensions between Bermuda, its colonial governor and the English government.

“From now through Labour Day week, between 9:30 am and 2:30 pm Mondays and Wednesdays, locals will portray characters such as staunch imperialist governor, George James Bruere and Colonel Henry Tucker, long believed to be a conspirator in the plot.

“Led by Bermuda Tourism Authority [BTA] and funded by Norwegian Cruise Line [NCL], the cultural tourism initiative is a collaborative effort aimed at encouraging visitors to spend more time in St George’s and expose guests to the island’s history and culture in engaging ways. Local residents are also being welcomed to visit the town to enjoy the festive experience.”

“The feedback from store managers and visitors so far has been very positive,” said BTA Chief Experience Development Officer, Glenn Jones said. “We’re excited to introduce these initiatives to St George’s and it’s encouraging to see this level of support from stakeholders.

“The experience includes an additional incentive for NCL guests to browse St George’s shops, specifically Made in Bermuda artisans, where they are rewarded with a Bermuda gift after visiting several galleries and boutiques,” Mr Jones added. “This is designed to enhance the visitor experience with more exposure to local art and culture.”

“We are working to make the town more lively, with craft stalls in King’s Square, including Ashley’s Lemonade, with its refreshing drinks, plus buskers playing throughout the town, which all adds to the ambience,” said Corporation Secretary Candy-Lee Foggo.

For town visitors interested in a more detailed history, the Bermuda National Trust has also opened Tucker House, the historically preserved home where local conspirators were believed to have met. The house is open Mondays and Wednesdays this month, 10 am to 4 pm.