Bermudian model Kali Lespere is featured on the cover of Garden & Gun magazine, with the publication also highlighting the island in a nine-page feature story.

In addition to Ms Lespere gracing the cover of the February/March 2021 issue, a number of Bermudians were hired and credited in-magazine for the photoshoot including photographer Meredith Andrews, videographer James Doughty, stylist Perri Furbert, stylist assistant Liantae Caines, hairstylist Ciara Muat, with make-up by Serena Brangman. 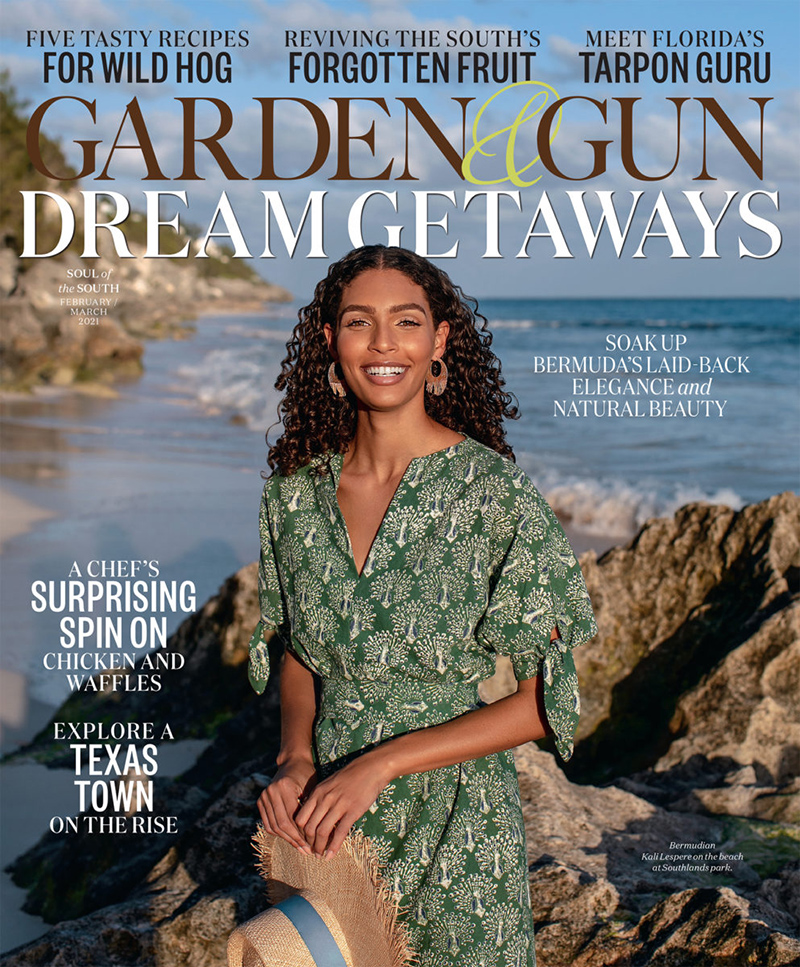 “Bermuda snagged a major publicity win with a Garden & Gun [G&G] magazine cover story unveiled this week. The Bermuda story has so far yielded more than 150,000 impressions on a single post on Instagram with hundreds of thousands more on other social channels. The magazine reaches 1.6 million readers through digital and print editions,” the BTA said.

A spokesperson said, “Writer Latria Graham shared her Bermuda experience in words and pictures supported by a crew of Bermudian creatives hired and credited in-magazine for their work on the shoot. Local model Kali Lespere’s cover shot was captured by Bermudian photographer, Meredith Andrews, which served to support the team’s vision of the piece as an insider’s guide to Bermuda.

“The Bermuda Tourism Authority’s marketing and public relations team worked very closely with the magazine for several months to land the cover feature.  Additionally, the public relations team welcomed the G&G journalist, Latria Graham to the island last November and curated an itinerary that resulted in a nine-page feature story in the same issue.”

“For so many of us, Bermuda is the ultimate dream vacation. And having spent the last eleven months daydreaming about travel that takes our breath away as well as inspires our minds and feeds our souls, we felt like the time was right to shine the G&G spotlight on Bermuda. Hard to imagine a spot better suited to checking all the boxes for our readers,” shared David DiBenedetto, G&G Editor in Chief.

“Bermuda’s food, culture, history, and people played a strong supporting role and provided enough inspiration for a far longer story than was originally planned. The writer’s interests were strongly focused on the outdoors and nature including bird-watching, star-gazing, plant foraging, cave swimming, sunrise hiking and shopping the Farmers Market,” the BTA added.

“The coverage represents a powerful return on investment for Bermuda’s ongoing public relations efforts. From the immediate job opportunities that emerged for Bermudian talent in November to the long-term visibility for the destination through featured culinary and adventure experiences.”