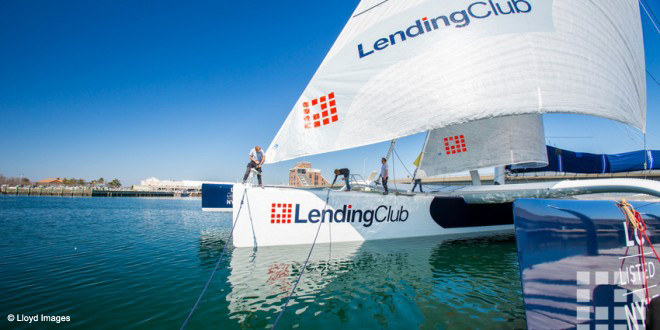 If you live abroad and dream about reaching Bermuda’s shores by boat as quickly as possible, you may want to get in touch with the crew of the Lending Club 2, who shattered a record by sailing to the island from Newport in under 24 hours.

The crew of the Lending Club 2 broke the 635-nautical mile Newport to Bermuda sailing record as they arrived on the island at about 2.00am on April 20, 2015, with their time of 23 hours, 9 minutes, and 52 seconds breaking the old record.

The record, set by Lending Club CEO Renaud Laplanche, co-skipper Ryan Breymaier, and the crew of the 105 foot trimaran, will be subject to ratification by the World Sailing Speed Record Council [WSSRC].

The previous record for the Newport to Bermuda passage was held by late adventurer Steve Fossett for 15 years after he made the trip in 38 hours, 35 minutes, and 53 seconds aboard the 125 foot catamaran Playstation at 15 knots in 2000.

This latest achievement follows after Lending Club 2’s record-setting passage of early April from Cowes, Isle of Wight to Dinard, France, crossing the English Channel to confirm their place in the sailing record books; Guinness World Records has also confirmed that they will include the record.

That 138-nautical mile passage was completed in 5 hours and 15 minutes, a full eight minutes faster than the previous record, which had stood since 2002.

“Steve Fossett was a great sailor who I had the honour to sail with on Playstation,” said co-skipper Ryan Breymaier, a member of the Royal Ocean Racing Club. “We are very happy to honor his memory with such a fast time.

“He would have been content to see his mark bettered with such a great time. We’re thrilled with the record we set today – it’s fantastic to have the wind at our back as we head to the Transpac.”

Laplanche chartered the the 105-foot Lending Club 2 for the 2015 season with the express goal of conquering three speed sailing records: Cowes to Dinard, Newport to Bermuda, and the 2,225-mile Transpac [Los Angeles to Honolulu] race.

With two of those records successfully set, the Lending Club 2 will return to the City by the Sea and remain at Newport Shipyard until the end of April. The yacht will then head to New York for a week before sailing through the Panama Canal to arrive in San Francisco in June, and then aim for third record setting journey.

The Lending Club Sailing team is an international crew with a mix of American, French and German sailors.

Training and racing together since the start of the program, the same team that set the first two records will be on-board as they attempt to break the third, including co-skippers Renaud Laplanche [FRA/USA] and Ryan Breymaier [USA], who is also the Project Manager, Captain Jan Majer [USA], Navigator Boris Herrmann [GER], Roland Jourdain [FRA], Jean-Baptiste Le Vaillant [FRA], Stanislas Delbarre [FRA], and Quin Bisset [NZL].

Ready to set sail? To learn more about arriving in Bermuda by yacht, click here. For more information on watersports and boating in Bermuda, click here. To keep up with all the latest news on the upcoming America’s Cup – the ultimate sailing competition – click here.