Bermuda’s Nonsuch Island has a new resident, as a female Cahow recently returned to Burrow #831 in the Translocation Colony A to lay her egg, all while being “being attentively observed by her mate.”

A spokesperson said, “Traditionally, after spending December apart out at sea foraging, the females arrive first, laying their single egg within hours of their return with the male then arriving 1 to 3 days later to take over incubation; however in this case the male had arrived 3 days prior and was awaiting her return.

“This gave scientists and followers around the world including the Cornell Lab of Ornithology Team, Jeremy Madeiros – Senior Terrestrial Conservation Officer from the Department of the Environment and Natural Resources and Nonsuch Expeditions Team Leader J-P Rouja the rare opportunity to observe for the first time ever, how a male Cahow would react to the normally solitary egg laying process. 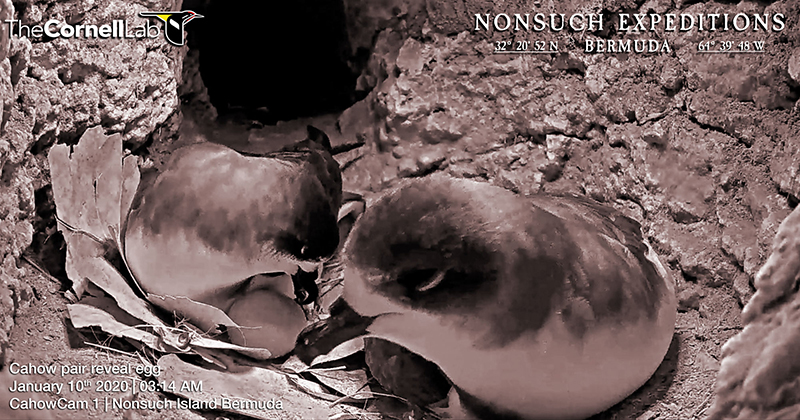 “After preening each other and re-distributing the nest materials for the first hour, the female settled in to lay her single egg around 03:12 whilst being attentively observed by her mate and by 03:14 it had been laid.

“Jeremy has been tracking bird returns and egg laying dates throughout the Colonies for decades and not only did this year produce one of the earliest eggs being laid on record [back on December 27th] but then, when the first bird to arrive in the CahowCam nest did not promptly lay an egg as expected, a quick outing to Nonsuch was organized to confirm that it was in fact the male.

“As of the time of this writing, both Cahows were in the nest which can be watched live at www.nonsuchisland.com and it will be interesting to see if the female departs immediately or spends a day or two sharing the egg with her mate before leaving him to take on the first incubation shift which is usually around 2 weeks.

“Viewers can also tune in to wait for the return of the pair in the CahowCam 2 nest which is still empty, the nesting timing of which tends to be about week later than CahowCam 1, which last season also hosted a somewhat annoying room-mate: Stormy The Loneliest Petrel.

“Incubation is on average 53-55 days, after which if all goes well, tens of thousands of viewers will be watching to see the chicks hatch, if interested in alerts, please sign up to our Newsletter.

“We are looking forward to another very interesting and hopefully record breaking year!”