The Department of Environment and Natural Resources, along with LookBermuda’s Nonsuch Expeditions CahowCam Project, announced that the 2019 CahowCam Nesting Season has officially started with the return of a female cahow to Nonsuch Island and the laying of a single egg this morning.

They explained, “The incubation period for the egg is generally 53 days [approximately]. For the first few weeks, the male will take on ‘nest duty’ whilst the female goes back out to sea to feed and regain her energy, having just produced an egg weighing almost a third of her body weight! Once the female returns, the adult pair will alternate shorter shifts on the egg until it hatches in early March, if all goes well.”

Chief Terrestrial Conservation Officer Jeremy Madeiros said, “I was happy to see the return of our CahowCam female last night just before midnight. She flew in during the 35 to 40 knot gale, just ahead of the cold front that came through, effectively using the winds as a fast lane to bring her back from her feeding grounds to the North. 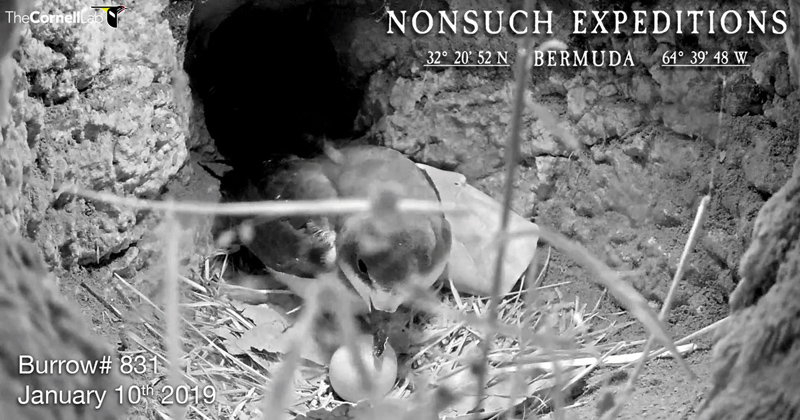 “For the following two hours, whilst I watched her preparing the nest and laying her egg, I could hear other Cahows calling in the background so it is clear that others came in with the same front.

“As of two days ago, six of the 18 nests in Translocation Colony A had returned birds and, after a quick check this morning, I can confirm that there are now birds in nine of the 18 nests, six being females on eggs and three being males awaiting their mate’s return.”

Nonsuch Expeditions Team Leader JP Rouja said, “We had been watching for her return for the past few days and had alerted our Nonsuch Expeditions and Cornell followers to expect her over the next few nights, so it was amazing to see her show up exactly on schedule. 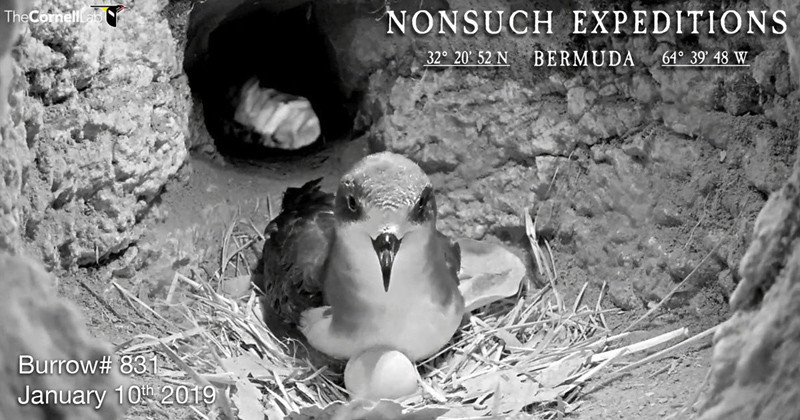 “As luck would have it, her first activity was to rearrange the nest and, in doing so, she kicked some dried grass in front of the lens. Nonetheless, our team and other late night viewers were able to watch her lay her single egg just after 1am, as Jeremy had predicted, within an hour of her return.”

Charles Eldermire, Bird Cams Project Leader at Cornell Lab of Ornithology said, “There’s nothing quite like the happy relief I felt watching the female Cahow amble into the nest burrow from the stormy darkness outside.

“I was also glad that, despite her frenzied nest excavations, we were able to see her calm, determined focus as she laid a single egg. Everyone here is excited to see what the cahows teach us this season, and we’re looking forward to sharing their journey with viewers across the world.”

“Watch the newly upgraded HD CahowCam Live stream via www.nonsuchisland.com or sign up for our Newsletter selecting the CahowCam alert option to be notified by email for significant nesting season milestones,” LookBerrmuda said.