A spokesperson said, “SailGP returns to Bermuda for a second consecutive season opener after its spectacular Season 2 debut this past April. Heart pounding excitement will reignite the local atmosphere with high-speed F50 foiling catamarans on the Great Sound for the Bermuda Sail Grand Prix presented by Hamilton Princess on May 14-15, 2022.

“Working with the Bermuda Tourism Authority [BTA], the league’s Official Host Partner, SailGP will be a marquee event in the spring of 2022 and 2023. The two-year agreement not only brings exceptional entertainment value to the 21 square mile island-nation, it also shines a spotlight on this mid-Atlantic jewel during its two-day broadcast in over 175 territories. 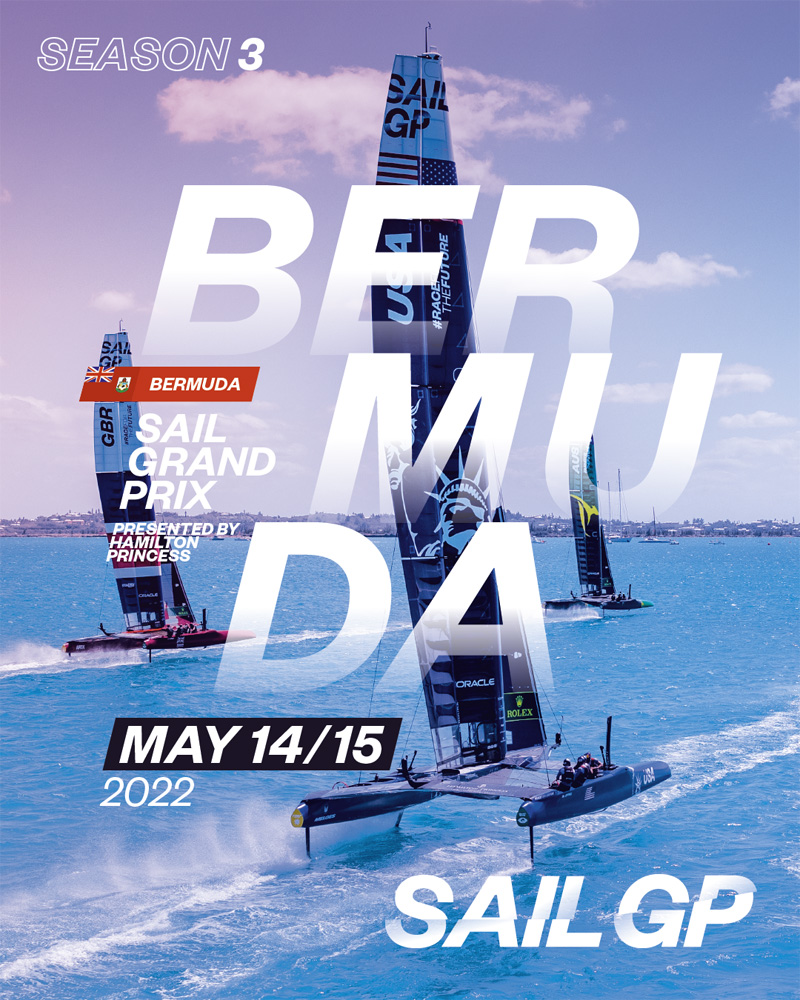 Bermuda Tourism Authority CEO Charles H. Jeffers II said: “We’re thrilled to welcome SailGP back to the island for 2022 and 2023. While an island-wide lockdown disrupted the 2021 season, limiting spectator activities and visitor arrival numbers, SailGP organisers and athletes still pulled off a spectacular competition that injected a welcome economic boost into the economy.

“Meanwhile, the franchise put a high value global spotlight on our destination with coverage that reached over 89 million viewers in 60 countries and provided extended visibility throughout the season.”

The organisation said, “Adrenaline-fuelled and purpose-driven, the league brings the most exciting racing on water – featuring world-class athletes – to iconic natural venues around the world, while engaging with communities, local sailing clubs, and organizations.

“As part of SailGP’s better sport strategy, diversity and inclusion will be a continued focus for Season 3. The league will continue to give opportunities to female athletes as part of its Women’s Pathway Program – racing onboard the high-speed F50s throughout the season – to accelerate inclusion within the sport and inspire change.

“Continuing relationships established in Bermuda from Season 2, SailGP will use its community-engagement arm – SailGP Inspire – to provide young people from diverse backgrounds with access to the sport and give career opportunities within the wider marine industry.” 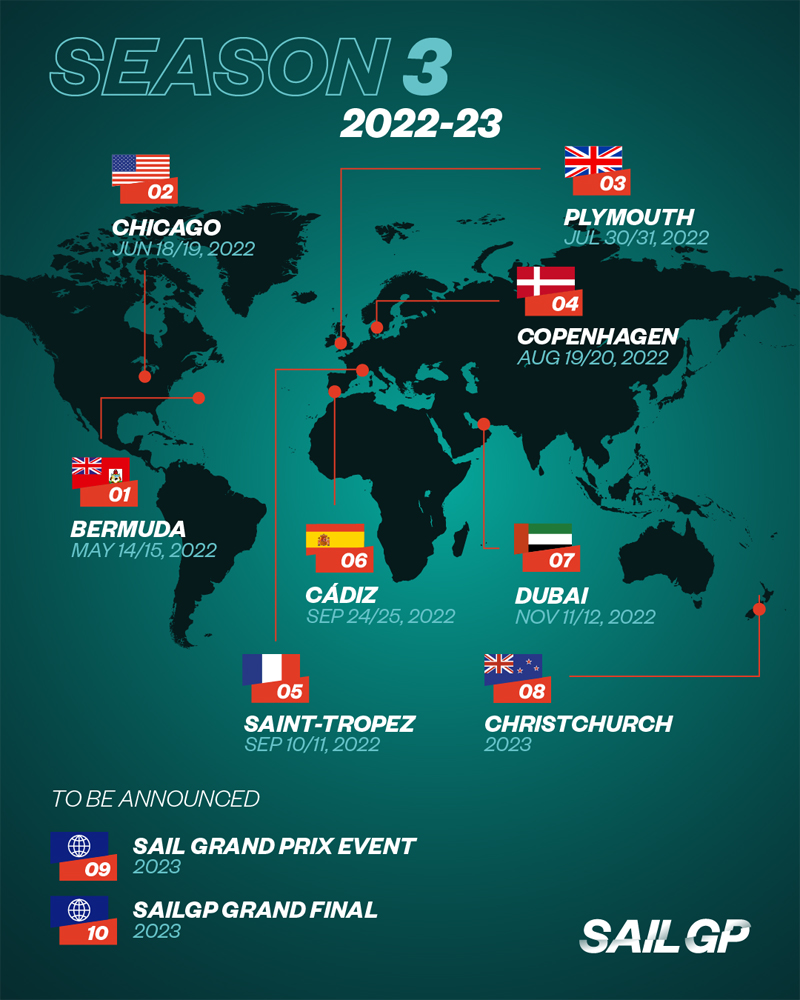 Bermuda Tourism Authority Director of Global Sales & Business Development, Hazel Clark said: “SailGP brings world-class racing and marketing opportunities, and aligns with Bermuda’s tourism goals. Beyond those key business metrics we have embraced the values, purpose-driven initiatives and community centered programs that have made this event even more meaningful.”

A spokesperson said, “As the first climate positive sports and entertainment property, SailGP will continue to push boundaries in the global event industry and its Race for the Future. From its inception in 2019, SailGP has been measuring, reducing and contributing its entire carbon footprint and has set an ambitious target of 55 percent reduction of its carbon footprint – based on science – by 2025, as well as committing to being fully powered by nature by 2025 on shore and on the water.

“Bermuda being a host city in Season 3, will share SailGP’s commitment to climate action and a cleaner future through deep collaboration. By signing the league’s Climate Action Charter – working alongside CDP – a commitment to local impact projects will be cemented, focusing on clean energy and wider ocean conservation.

“Running concurrent to the championship trophy for the on-water racing, SailGP’s pioneering Impact League will return even stronger in Season 3. The forward thinking league – introduced in Season 2 – tracks the positive actions the teams make to reduce their overall carbon footprint and help accelerate inclusivity in sailing. The end result of the season is two podiums, one for sport and one for the planet and the prize fund going to the team’s purpose partners, which the cities will also contribute towards for the first time.

“SailGP Season 3 has been expanded to include ten events, with seven grands prix taking place in 2022 and the remainder in the first quarter of 2023, with the season expected to finish in April 2023. After the championship kicks-off for the second straight year in Bermuda the ten-nation fleet will head to a new SailGP destination in North America and include a home race for Jimmy Spithill’s U.S. team at Chicago’s Navy Pier on Lake Michigan in June. The Windy City will also see the league return to action in Season 4. 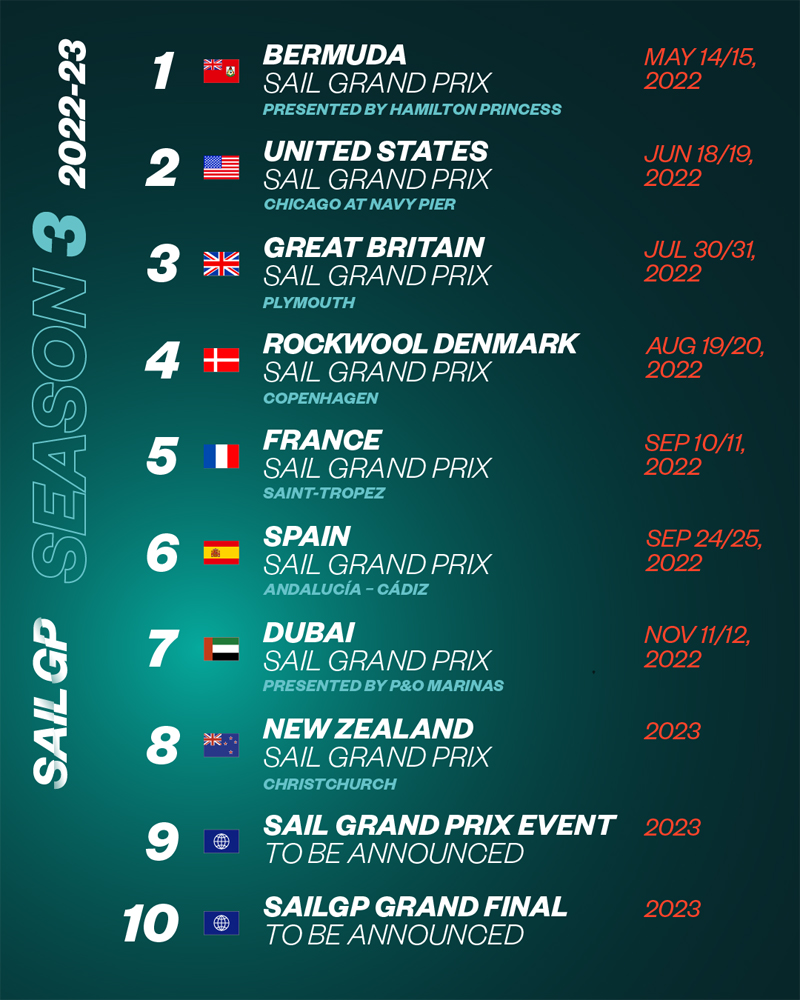 “The fleet will arrive in Europe for the summer with four European events planned. Following successful events in Season 2, SailGP will return to Plymouth – Britain’s Ocean City – in late July, the iconic French destination of Saint-Tropez in September and then later the same month Cádiz, in Andalucía, Spain. In addition, the fleet of hydrofoiling F50s will revisit Denmark, but this time, the capital city of Copenhagen will host the ROCKWOOL Denmark Sail Grand Prix. Racing for 2022 will conclude with another new addition to the calendar as SailGP hosts its first Middle Eastern event in Dubai, UAE presented by P&O Marinas on November 11-12.

“Season 3 will continue into 2023 and include an event in New Zealand as part of a major four season partnership with New Zealand Major Events. Through the partnership – spanning Season 3 to Season 6 – Christchurch and Auckland will share hosting duties of SailGP, claiming a permanent fixture on the SailGP season calendar and the first home event for Peter Burling and Blair Tuke’s New Zealand SailGP Team.

SailGP CEO Sir Russell Coutts said: “Racing in Bermuda for both Season 3 and Season 4 promises to build on the momentum created in Season 2. The Island’s stunning backdrop and the natural amphitheatre of the Great Sound is second to none and we look forward to having a full event village where more fans can enjoy the high-energy atmosphere that SailGP is known for.

“With an expanded season calendar, an impressive and growing collection of commercial and broadcast partnerships, purpose and impact at our heart with our focus on environmental sustainability, our Women’s Pathway Program expanding diversity and inclusivity, and an immersive high-tech fan experience through our broadcast offer, I can’t think of a better place to begin Season 3.”

“*Further events will be announced to complete Season 3, which will conclude April 2023 and is expected to comprise ten events.”

SailGP To Be Held On April 24-25, Ticket Sales Launched