The storm-tossed remains of an American Civil War blockade runner have yielded long-buried secrets to an international team of archaeologists working with Bermuda’s Department of Conservation Services.

A secret stash of wine, lodged inside the bow of the wreck of the Mary Celestia, which lies immediately offshore from the Fairmont Southampton Resort, has emerged from the sand and silt which had shrouded it since the ship struck the reef and sank on September 6, 1864.

Five bottles of wine, still packed inside a wooden crate, remained corked with their liquid contents intact after 147 years underwater. The top of the crate emerged from the sand inside the bow after a series of winter storms swept over the site in January 2011. 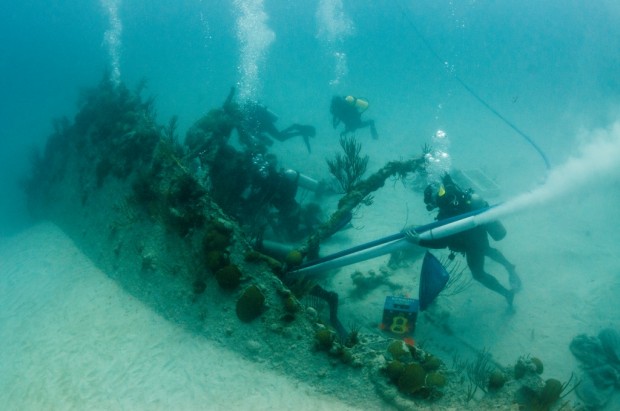 Dr. Philippe Rouja, Bermuda’s Custodian of Historic Wrecks, secured the bow of the wreck after recovering a loose bottle of wine, also still corked, and immediately reached out to colleagues at NOAA and the Waitt Foundation in order to create an expert team with experience in marine heritage management and the excavation of shipwrecks of this period to explore and potentially rescue this unique find. 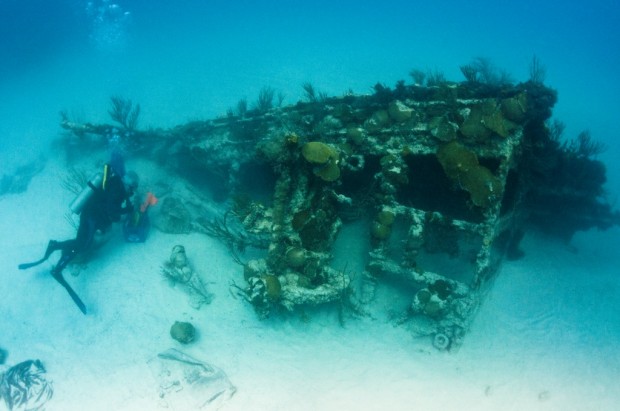 The Waitt Foundation has underwritten the displacement costs of the initiative for all foreign partners as well as sending Dr. Dominique Rissolo, an archaeologist and executive director of the Waitt Institute, along with Joe Lepore, the Waitt Institute’s chief diver and head of ship operations, to aid in the exploration and recovery of the contents of Mary Celestia’s bow.

Archaeologist Dr. James Delgado, the director of the Maritime Heritage Program in the Office of National Marine Sanctuaries of the U.S. National Oceanic & Atmospheric Administration, joined by two NOAA team members, Tane Casserley and Wayne Lusardi, joined the rest of the team this past week to co-direct the project with Drs. Rouja and Rissolo. 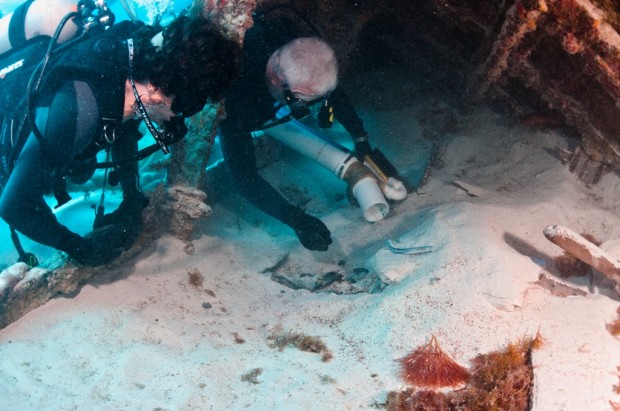 Carefully removing all of the sand and silt from inside the broken but still intact bow of the wrecked blockade runner, the team exposed the wooden crate, intact wooden paneling and shelves, and a corroded metal wash basin rusted fast to the inside of the hull. As Dr. Delgado gently removed the silt from the crate with Dr. Rouja, the tops of the bottles inside slowly emerged with their corks still in place.

“The promise of the one bottle found this past January was realized in that moment,” said Dr. Rouja. “To reveal even more of this lost cargo standing lined up in their wooden crate as if they were waiting for their owner to return is a great reminder of how archaeology adds excitement and value to our shared historical narratives.” 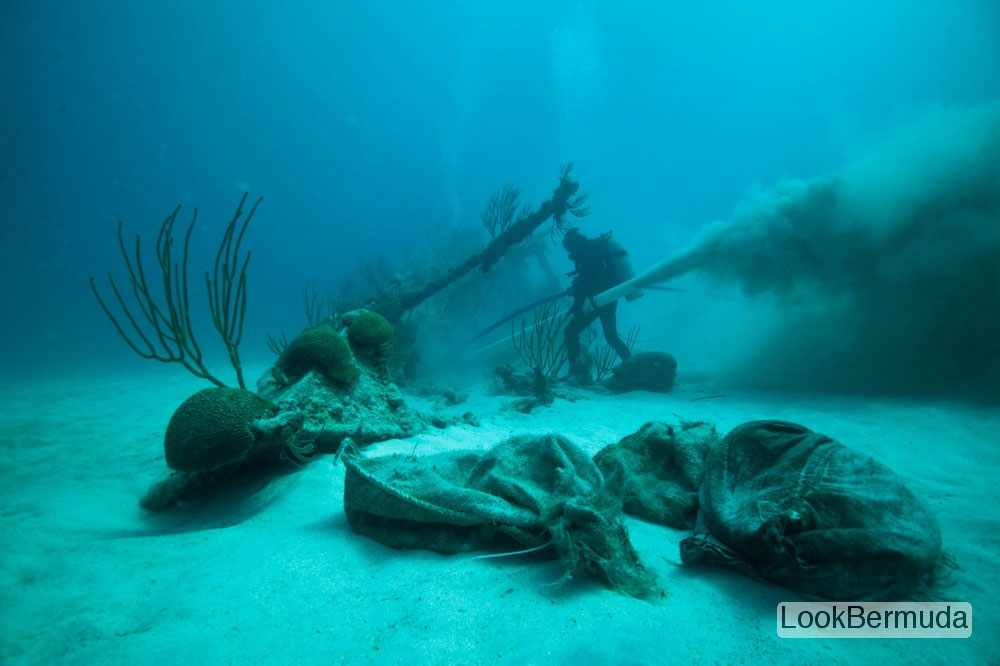 Mary Celestia is a wreck with historical significance to the United Kingdom, where she was built, Bermuda, where she operated out of and where she wrecked, and the United States, where she ran to as a blockade runner during the U.S. Civil War.

For the NOAA team, Mary Celestia had special importance. The joint heritage represented by this wreck is a direct link to NOAA’s Monitor National Marine Sanctuary in North Carolina and NOAA’s work to document and better understand and share the stories of the shipwrecks near the wreck of Monitor that speak to the Civil War, World War II, and the shipping that for centuries has been linked to this section of coast, an area known as the “Graveyard of the Atlantic.” 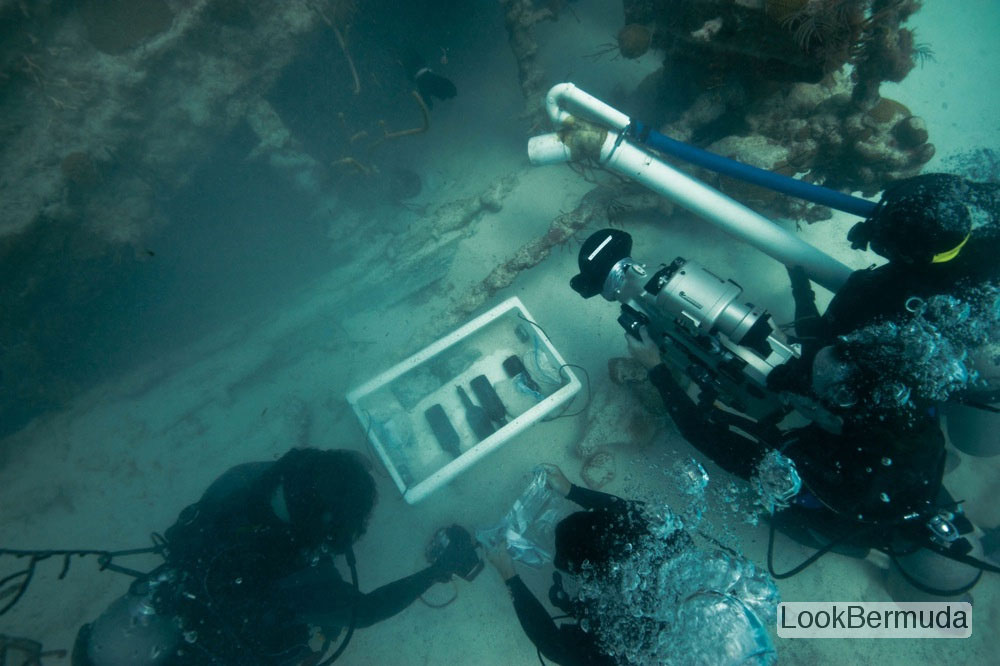 “The ocean is a vast repository of human history, some of it encompassed in marine protected areas and sanctuaries. Our team was pleased to join this project to help protect and interpret our joint heritage that links this protected shipwreck sites in Bermuda to Wilmington, North Carolina and our nearby sanctuary.” said Dr. Delgado.

“After undergoing laboratory analysis and preservation treatment, the wine and our other finds will tell their story to Bermudians and the rest of the world thanks to modern science.”

The excavation also yielded the remains of leather shoes, rope, a hairbrush and the wooden form for a shoe. After clearing the bow and documenting the fragile wooden structure inside this area of the ship, the team replaced the sand to preserve the wood inside the now empty compartment.

The artifacts are in the conservation laboratory at the National Museum of Bermuda where the effort will shift to further study and preservation treatment.

This discovery in the bow of the Mary Celestia has yielded a long-lost secret in a box of wine stashed away from the ship’s cargo– a cargo at the time said to be nothing more than tinned meats. It compels researchers and scientists to take another look at the historical narrative surrounding one of Bermuda’s most iconic dive sites.

Mary Celestia is a compelling reminder of how the shattered iron bones of a wreck ravaged by time and elements can still connect us to the people of events of long ago.

“I wonder who left that crate in the bow,” commented Dr. Rissolo, “and why. “ That question may forever remain unanswered. But what is clear is that while Mary Celestia may have yielded one of her secrets, she retains others in the form of questions about what type of wine is inside the bottles and where it came from. Scientists will now seek to answer those questions.

This project is being filmed by LookBermuda/LookFilms, and Jean-Pierre Rouja from LookBermuda said: “This is by far our largest project to date for which we assembled a team from Bermuda, the US and the UK and captured incredible underwater footage which will really showcase this wreck and diving in Bermuda.”