Bermuda’s health protocols have inspired travellers to choose the island, with 50% of Bermuda’s air visitors saying the island’s rigorous safety protocols influenced their decision to travel here and 97% saying they felt either “safe” or “very safe” in terms of COVID-19 during their visit.

This was from the BTA, which said, “Bermuda’s robust health and safety protocols and resulting success in managing COVID-19 have inspired travellers to choose the island and made them feel safe during vacations. Local residents also feel re-assured by Bermuda’s pandemic response and comfortable with the tourism industry’s re-opening, according to recent surveys. 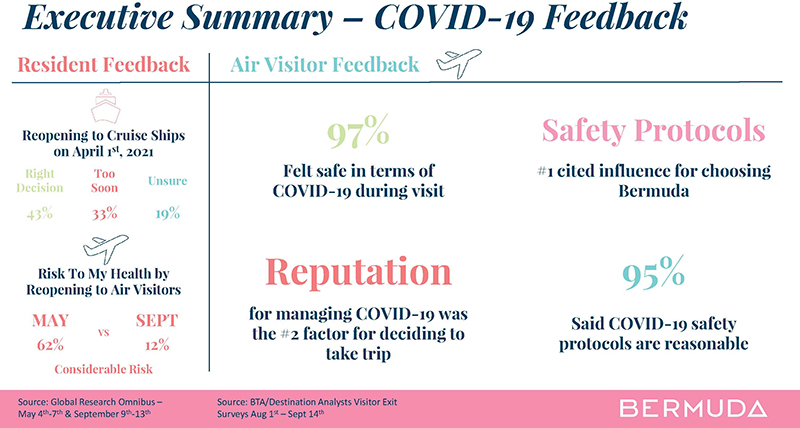 “In ongoing exit polls conducted in August and September, half [50%] of Bermuda’s air visitors said the island’s rigorous safety protocols influenced their decision to travel here for a vacation.

“Safety was the number-one influence cited for choosing Bermuda as a destination. Once they were on the island, an overwhelming 97 percent felt either “safe” or “very safe” in terms of COVID-19 during their visit to Bermuda. Similarly, 95 percent of exit-survey respondents felt the island’s protocols, including pre-travel, airport, and follow-up coronavirus tests extending 14 days, were “reasonable.”

“And while local residents expressed caution back in May before regularly scheduled commercial air service resumed in Bermuda July 1, many more now feel comfortable. In May, a public poll found 62% of islanders believed re-opening to air travel would pose considerable risk to their health; by September, only 12% felt that way.

The BTA added, “Bermuda is recognised as one of the most successful countries in the world in managing the pandemic, via effective per-capita testing, diligent contact tracing, and immigration and community health protocols.

“The US Centers for Disease Control [CDC] ranks the island at Level 2, one of only six places assessed with “moderate” COVID-19 risk, while the UK Foreign & Commonwealth Office waived a 14-day quarantine requirement for returning residents from Bermuda. The island also earned the World Travel & Tourism Council [WTTC] “Safe Travels” stamp for its achievement of top global health standards.”

“Bermuda took decisive action and toed a tough line on protocols for travellers and the general public, and it’s paid off,” added Mr Jones. “That safety record has now become a cornerstone of our destination marketing—it’s our differentiator.”