A lucky group of 60 wine enthusiasts and special guests recently bore witness to the opening and tasting of a bottle of wine that had laid submerged in the wreck of the Mary-Celestia – resting beneath the waves near Bermuda’s Gibbs Hill Lighthouse – for more 150 years.

The event, titled “From Deep Below: A Wine Event 150 Years in the Making,” took place on March 6, 2015 at the Charleston Wine + Food Festival, focusing on the treasure that had been recovered from the remains of the Civil War blockade runner, which sunk in 1864.

While spectators looked on, a panel of six of the world’s top Sommeliers decanted, tasted, and assessed the bottle, one of five that had remained hidden in the bow of the ship for 150 years.

The wreck itself, located within view of Gibbs Hill Lighthouse, only several hundred yards off of the South Shore in Bermuda, is the subject of a film being produced for PBS by LookBermuda which will air on American public television and beyond this year.

The bottle in question was the second to be opened, the first having been sent to Bordeaux for expert analysis in 2014, the results of which were released for the first time at the event.

The first bottle arrived in Bordeaux in perfect condition, with its contents undisturbed by its years underwater and its subsequent trip half way around the world. The second bottle, however, was not as fortunate, as the cork was found to have been compromised allowing seawater to mix with its contents over time.

This did not dissuade the assembled panelists, however, as no matter the apparent quality, this was still seen to be a once in a lifetime opportunity to sample such a unique and historic product.

“I’ve had shipwreck wines before, they can be great,” master sommelier Paul Roberts said.

But unfortunately this one was not, as the cloudy yellow-gray liquid was found to have “a heady sulfur bouquet with distinct notes of saltwater and gasoline” and by others as “a mixture of day old crab water with hints of citrus and alcohol,” much to the amusement of the audience. 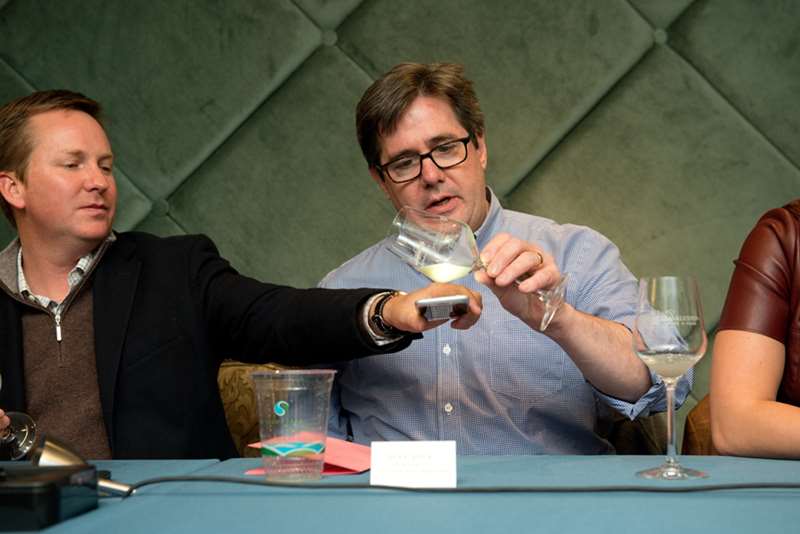 The evening started out with a presentation by Dr. Philippe Rouja, Custodian of Historic Wrecks from the Department of Conservation Services, who found the first bottle and launched the recovery expeditions, and the LookBermuda team who are producing the film.

This was followed by a detailed scientific report from wine chemist Pierre Louis Teissedre of the University of Bordeaux who had analyzed samples drawn from the first bottle in his laboratories in France, stating that it was a room-clearing mix of camphor, stagnant water, hydrocarbons, turpentine, sulfur, containing 37 percent alcohol and although further testing was required, in his opinion the first bottle [it has been suggested that it might have been a mixed case] could possibly have been a Spanish fortified wine, a spirit, or perhaps medicine.

A subsequent dive expedition organized in conjunction with Dr. James Delgado from NOAA and supported by the Waitt foundation turned up the additional bottles, as well as sealed bottles of perfume, women’s shoes, hairbrushes and pearl shell buttons. The contents of the remaining three bottles are still a mystery and could very well contain entirely different products.

2015 marks the 150th anniversary of the end of the Civil War, which was fought from 1861 to 1865 and began in Charleston Harbor with the Battle of Fort Sumter and, as such, marked the perfect timing for sharing this story.

The upcoming film takes the opportunity to showcase the Bermuda-based blockade runner’s role in the Civil War especially as one of the story lines traces the wine back to the descendants of one of the crew who still live in Charleston, some of whom attended the event and are assisting with the research. 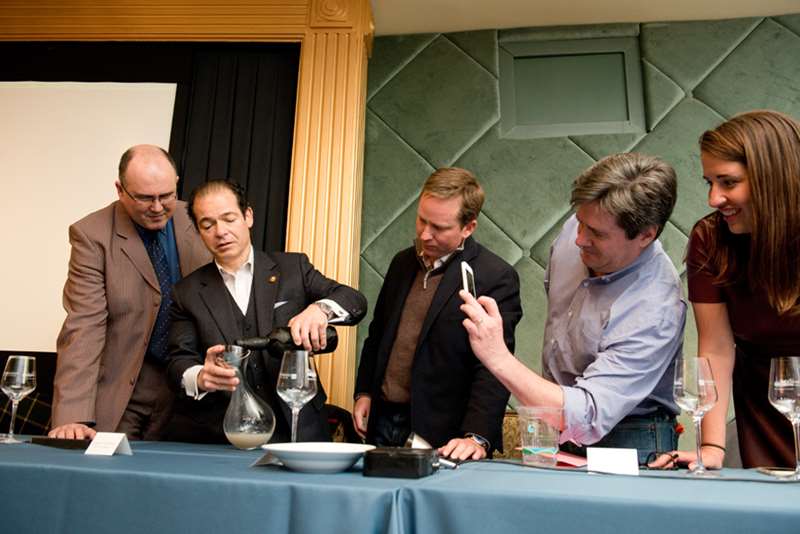 Philippe Rouja describes the project as, “An ideal combination of world class infotainment and the highest level science. This has become a transnational multidisciplinary project involving experts in marine archaeology conservation, social cultural analysts, historians, economists both local and international.

“The rescue archaeology project started with local explorers, divers and pilots and now it reaches wine experts . In each area the full range of possibilities has been explored. The fantastic part of this last phase of this current, very entertaining and fun story is that it rests on the most advanced scientific analysis of one of the bottles recovered – artifact mc 008.

“Provided to the world’s leading wine chemist at the university of Bordeaux’s institute of Wine and Vine, professor Pierre Louis Tesseidre has subjected the wine to the most rigorous scientific analysis possible.”

Despite the condition of the bottle’s contents, the event proved to be a thoroughly entertaining and lighthearted evening, with the audience constantly on the edge of their seats, being picked up by over 60 news, television and radio outlets across the world showcasing Bermuda’s cultural and diving assets.

To learn more about Bermuda’s shipwrecks – our waters play host to more than 300 of them! – click here. For information on scuba diving opportunities around the island, click here.